The De Havilland DH.100 was designed as a single seat fighter in the nineteen forties by the British De Havilland company. It was one of the first aircraft to use the jet engine and flew first September 1943 and called the Vampire. The jet engine used in production was the Goblin and it was put into production with the Cold War emerging, starting with the Royal Air Force. Several Vampire versions were developed further including a trainer two seater with also use of the Nene jet engine.

License production of the Vampire F2 as F.30/ FB.31 fighter-bombers was done in Australia for the RAAF. SNCASE in France made the Vampire under license as the Mistral. Also Canada used the Vampire as well as other countries like India, Egypt, Finland, Norway, Sweden, Switzerland and  Rhodesia. Over 3,000 Vampires were manufactured in various versions and it was often the first jet in an air force after the Second World war.

(Note that for naval use, also a variant was developed as the "Sea Vampire" and later the Venom two seaters for the Royal Navy / Fleet Air Arm which however is significantly different). 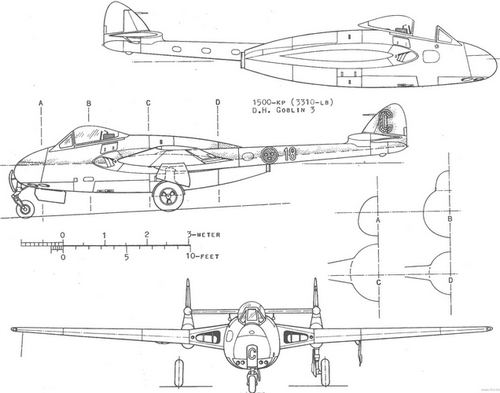 This Vampire F.3 was a single seat fighter for the RAF with code "VT812" and in operational use from end 1947 to 1953 also in the Mediterranean. It moved around at various museums and now is at the Hendon RAF Museum in London.

This Vampire T.11 trainer version had a Globin 35 engine and some aircraft had ejection seats. This aircraft with code "WZ590" was used by the RAF from 1953 to 1971 and was seen at the Imperial War museum in Duxford in 2015.

This Vampire FB6 is a former Swiss machine (coded J-1129) that is now painted in an RAF Germany scheme marked as 'WA235' (current civil code N4024S). It is on display at the Planes of Fame museum in Chino (California USA).

This Vampire T.11 trainer was in service with the Royal Air Force. Coded XH292 (c/n 15610) in a silver dope paint scheme. It is on display at the Koninklijk Leger Museum (Brussel Air Museum) at the Jubelpark , Brussel, Belgium. The paint condition is not splendid but still it is as orginal but its tyres need a bit of air!

The Mistral was based on the Vampire and manufactured under license by SNCA Sud Est (SNCASE) in France. The SE.532 first flew in 1951 and a next version was the SE.535 based on the De Havilland FB.53. It flew for the French Armee de l'Air. Here SE.535 Mistral coded "7-CE" / 535 no.4 is seen as on display at the Musée de l'Air et de l'Espace located at Le Bourget airport in Paris (France).

Several models in various scales exist of the Vampire. In 1/72 scale from FROG, Airfix, Heller/Revell, Azur / Special Hobby, CyberHobby, Marivox and recently Amodel short run and there is also a CMR resin kit.  Some 1/72 kits were "copied" by other brands.

In 1/48 scale injection kits were made by Hobbycraft, Trumpeter and short-run kits by Aeroclub, Classic Airframes and Alley Cat resin. Of the French Mistral Contact resin had a 1/48 kit.

In 1/32 scale there was only a rudimentary vacuform kit from ID Models (now Tigger Models). (Note that the old 1/32 scale Matchbox/Revell kit is a Venom and not a Vampire). HPH / Infiniti Models have anounced a 1/32 kit for end 2021.

this walk around page was first created November 2015 (c) Copyright!