The Convair F-102 Delta Dagger was the first operational supersonic interceptor and delta-wing fighter of the USAF. Its main purpose was to intercept invading Soviet bomber fleets and no gun was fitted, only missiles to intercept. It used an internal weapons bay to carry both guided missiles and rockets. Its wing was designed after many aerodynamic high speed exploration using swept wings and delta wings like on the Convair XF-92. The F-102 got a Delta wing and the prototype flew October 1953 but experienced an unknown high drag. Tests revealed this to be caused by the pressure distribution along the aircraft length and cross-section. So as originally designed, it could not achieve supersonic flight. A major fuselage redesign was made, using the technique called "area ruling". This reduced drag.

The USAF put the type into service April 1956, primarily in the Air Defense Command. It was armed with missiles only. During its career, a wing XX modification on some aircraft was also done with a cambered wing tip, reducing drag . The type was also used from 1962 in the Vietnam war until 1968.

The official name for the F-102 was Delta Dagger but the most common term used was "Deuce". Almost 900 planes were manufactured when production ended in September 1958. The TF-102A was a two-seat training version with a  side-by-side cockpit , leading to a very different appearance than the normal Delta Dagger, the side by side seating resulting in a much wider fuselage nose.

Many of the F-102s were transferred to United States Air National Guard duty by the mid-to-late 1960s, and the type was retired from operational service in 1976. 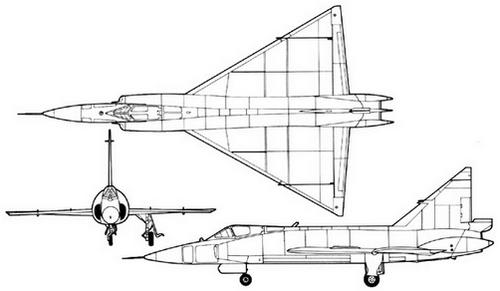 In the Netherlands, the USAF in Europe also deployed F-102 's. At the Dutch Soesterberg air base, January 1959 saw the arrival of 18 new F-102A Delta Daggers and USAF 32 squadron was once again re-designated, this time as an FIS. On July 1, 1960 the 32nd FIS was assigned to the USAFE 86th Air Division at Ramstein Air Base in West Germany. The 32nd divided its aircraft in 3 flights: red, white and blue. The aircraft markings varied over the years from red-white-blue vertical tail, red-white-blue flaps but also they wore a green/brown camouflage scheme.

Here an F-102 is seen in a 32FIS colour scheme, but please note that this restoration is not very accurate regarding colours and the airframe is incomplete. It is presented nevertheless and now this aircraft is on display outside the new National Dutch Military museum (NMM) at the former Soesterberg air base, The Netherlands.

This F-102A with serial 56-1114 served with the USAF and is on loan from the Dayton USAF museum. Here it is on display at the March Field Museum, Riverside, California USA.

This two seater trainer TF-102A coded USAF  54-1353 has a sun protected overcoated canopy. The aircraft was seen at the ‘Century Circle’ display of the AFFTC museum at the West Gate to Edwards AFB, CA, USA.

This is a F-102A of unclear origin. It has been restored and painted as "61188" of the Texas ANG. (It is reported that it is painted in a scheme as flown by later president George W. Bush at the early 1970s). It was seen at the Palm Springs Air Museum in Palm Springs, Ca.

Various kits in many scales are available. In odd scales Revell had various old kits as well as Aurora . In 1/144 Otaki and Arii had kits. In 1/72 there was the FROG kit, also released later by Hasegawa and Minicraft and good in shape but basic. Recently MENG has issued very nice kits in 1/72 scale (with 2 types of wing) which are really great!

In 1/48 there is a good Monogram / Revell kit. In 1/32 scale only a very basic Combat Models vacuform kit was available which is now quite rare.

The first version of this page was published in October 2016 by M. de Vreeze