The first generation Harrier was developed by Hawker Siddeley company as a VTOL (vertical take-off and landing) and STOL (short take-off and landing) aircraft in the nineteen sixties with a ground attack task. It was the first operational jet close-support aircraft with vertical/short takeoff and landing (V/STOL) capabilities. It had a single but very special Rolls Royce engine, the Pegasus, that had four rotating nozzles extruding at the fuselage sides. In vertical nozzle position, the Harrier could take-off vertically and land as well albeit with limited loads. The nozzles rotated than to a horizontal aft position, for normal flight at a maximum speed of about MACH 0.98. When a normal runway was available, the pilot selected that the engine nozzles were retained in near horizontal position enabling a larger take-off weight and thus more fuel or stores.

Several prototypes were developed but eventually it became a feasible production aircraft. The first operational Harrier was the GR.1.  and the Royal Air Force (RAF) introduced it in service in 1969. The Harrier GR.1 was exported in the seventies to the United States Marine Corps and known as the AV-8A. Later versions like the GR.3 with a laser nose were developed beginning seventies as well as many other versions.

The RAF used the Harrier during the Cold War also from Germany and Harriers could be deployed on small fields and woods. By the general public it was also known as the "Jump Jet". Harriers were in fact used in a variety of roles, including fighter, reconnaissance and attack. In the Falklands War it was also equiped with Sidewinders and Sea Eagles.

A special version was the Sea Harrier FRS for use on Royal Navy carriers and this version had a raised cockpit section for better view. It was introduced by the FAA in 1978 and flown to 1995.

Trainer Harriers were also developed like the T.2, T.4 and later T.8 with a longer fuselage and two crew cockpit. Some first generation Harriers were also exported to Spain as the AV-8S "Matador" (later in 1996 these aircraft went to Thailand) and Sea Harriers FRS51 were sold to India.

Based on the basic but good Harrier design, an almost new aircraft was developed, e.g. second generation with new technologies like materials and systems. Developed in conjunction with the American McDonnell company for the US Marine Corps, the AV-8B series emerged. Later on, this second generation Harrier II was  further developed by now British Aerospace (BAe) with a whole new series like the Harrier GR.5 and GR.7. (look here for the second generation walk-arounds....) 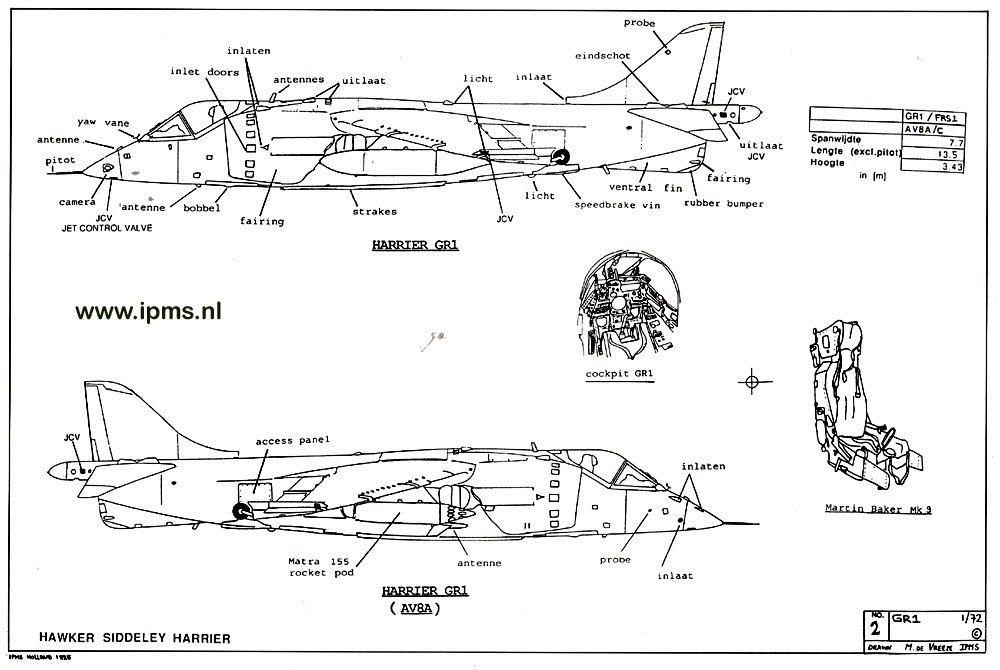 RAF Harrier GR.3 as seen in the museum in Hendon, London.

This Harrier GR.3 with its laser nose and registration "ZD668" of the RAF was seen at the "Yanks Air Museum" at Chino, California, USA. The grey colour seems a bit inaccurate and too light.

This Harrier T.4 trainer "XZ145" has a gloss black finish and this two seat aircraft was seen at the "Western Museum of Flight" in Los Angeles , California USA.

This appears to be a cockpit section of an AV-8A Harrier with the old style clocks and dials as used by the USMC.  (location we can not recall...)

A selection of Sea Harriers of the Fleet Air Arm seen at the British aircraft carrier HMS Ark Royal during a visit to the port of Amsterdam.

A selection of RAF Harriers and Sea Harriers seen at European air shows in the seventies.

This two seater TAV-8A coded "N701NA" was operated by the US Marine Corps. It was transferred to the NASA Ames research center for research purposes and here seen with the NASA livery. Seen on display at the Oakland Aviation Museum, Oakland airport, Ca.

Many Harrier models in plastic have been issued for the modeller.  Look here at our IPMS NL SPECIAL page for models and drawings about the Harrier

This walk around page was first created January 2016 by M. de Vreeze