The Horten H.IX  (or better known under the RLM designation Ho 229) was designed in the Second World War by the German Horten brothers. It was designed as a flying wing to be powered by jet engines. It never reached beyond the prototype stage and unpowered test were made first. The V2 was a jet powered test aircraft with Jumo 004 engines, tested beginning 1945. The V3 was to be the pre-production larger version to be powered by two Jumo 004C engines but never reached real operational deployment as the war ended. 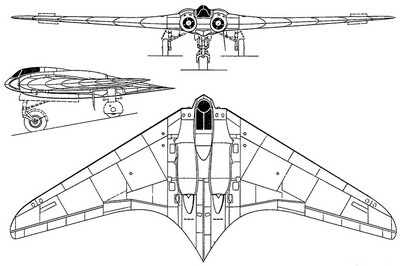 This airframe was captured after the War during "Operation paper clip" and  also investigated by the USAF. The only surviving Ho 229 airframe, the V3—and indeed, the only surviving World War II-era German jet prototype still in existence, is now located at the the Dulles annex of the Smithsonian Air Space Museum, Washington DC. It has been kept preserved as not enough detail information is available to do an accurate restoration or replica.

Several scale models have been issued despite the fact that this type was only tested. In 1/72 scale from Revell, A+V model, Pioneer and others. In 1/48 Dragon and Zoukei-Mura and even in 1/32 also by Zoukei-Mura.