The Gloster Javelin was designed after in the beginning 1950s as a subsonic night and all-weather interceptor aircraft for the Royal Air Force. It got two engines, a delta wing and a T-tail.  First flight was end 1951 and production aircraft were delivered first mid 1954 to the RAF. A few versions were developed including a trainer. Normal armament were Aden cannons and for the later versions Firestreak missiles. Nearly 400 Javelins were produced with also update programs. But quite soon the Javelin was accompanied by the supersonic BAC Lightning, a much more capable aircraft. 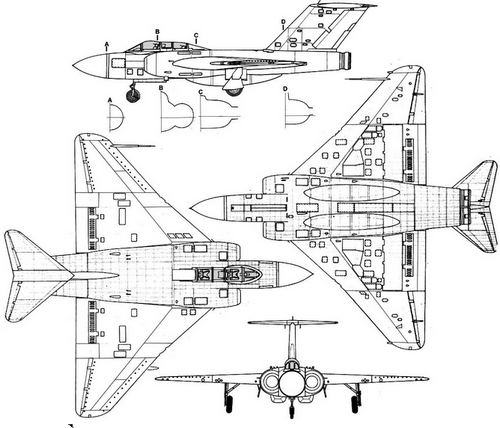 Here a Javelin FAW.5 with RAF code "XA699" is seen in standard RAF camouflage scheme. It was built in 1957 and served at several RAF squadrons. It was seen at the Midland Air Museum were it arrived in 1983.

This aircraft coded "XH897" is an upgraded FAW7 to FAW9 standard and served with the RAF. The scheme is here unusual as it was used  as test aircraft from 1968 at Boscombe Down in conjunction with the Concorde and also the MRCA. It was the last javelin to fly in 1975 and can now be seen at IWM Duxford (UK).

This same aircraft was seen earlier as well:

Several scale models have been issued of the Javelin. In 1/72 scale there was an old FROG kit (re-packed by Revell and Novo and others). The Heller 1/72 kit and Airfix kits are much finer. In 1/48 Dynavector had a vacuform kit but now Airfix has a very good Javelin FAW9 kit.