The Northrop F-5E / F  is a second generation fighter family based on the Northrop F-5A/B series. It differs substantially from the F-5A Freedom Fighter in having more powerful General Electric J85-GE-21 engines, the fuselage is enlarged a lot and the wings were modified with an increased wing area. Also more modern systems and avionics equipment is installed that includes a radar system. First flight of the F-5E was in August 1972 with the F-5F being the two seater trainer. The F-5E is also called the "Tiger II".

The F-5E was first not really needed by the United States Air Force, but later in 1975 orders came as it was perfect for fighter pilot training in "agressor squadrons". The F-5E was such was also exported as lower cost fighter to many countries such as Mexico, Brazil, South Korea, Singapore, Taiwan, Switzerland and Saudi Arabia. Many are still in use and even some private pilots fly the type. 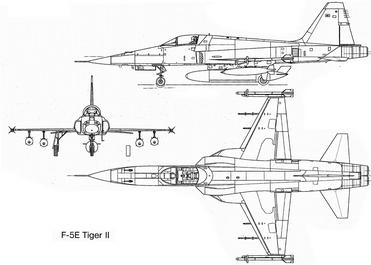 This F-5E  "RED 12" has BuNo 741574. It was used a Agressor trainer aircraft , mainly based at Yuma and retirement of this aircraft was in 2007. Paint scheme here is a "Marine agressor of the "Snipers squadron". It is located at the Flying Leathernecks Museum at San Diego (USA).

This aircraft coded 76578 is probably a F-5N in a black US NAVY finish of Agressor Squadron VFC-13. "Red 13" was seen during operations at Nellis AFB.

This F-5E has an "agressor" finish of VMFT-401. Was seen at the Joe Davies Heritage Airpark at Palmdale, Ca.

Various scale models exist of the F-5E. In 1/144 Dragon, Revell have kits. In 1/72 scale, many kit are available, like the very old Airfix and Heller kits. But the best 1/72 kits are from Italeri /Revell / Tamiya (all are the same mould).  In 1/48 AFV club, Italeri and Academy have nice kits, as well as Hasegawa but that is probably a re-packed Revell / Monogram kit.

Kangnam has a 1/32 scale F-5E , but the Hasegawa kit was much better (this kit is also re-issued by Revell), look for a build report at the site of one of our members, Meindert [ external link]

This webpage was first created March 2016