The American General Dynamics company developed the F-111 for a USAF and US Navy requirement for a high supersonic medium-range attack aircraft (TFX program) in the 1960s. It had a special design with variable wing sweep and a terrain following radar with all weather capability. It also had a small internal weapons bay. The US Navy would use it on-board its aircraft carriers and it was an adapted navalized F-111B design. A lot of development problems and cost overruns occurred and because of its large weight and the changing needs, the US Navy got out of the program.

Only the USAF ordered the type and service entry of the F-111A was in 1967. It's official name was "Aardvark" and it could carry weapons on wing pylons and a cannon could be fitted in the weapons bay. It was amidst of the Vietnam war but accidents happened, aircraft grounded and only really the problems were solved too late in 1972.

For the USAF also a "fighter bomber" was developed, being the FB-111 with extended longer wings. The Australian RAAF also ordered the F-111, the first version being the F-111C that entered service mid 1973, and called it the "pig". The F-111D was a more advanced version but delayed so meanwhile a simpler version was developed, the F-111E. The F-111F was a version with different systems for a tactical role. A very special version for electronic warfare was the EF-111 "Raven" of the 1980s. It had electronic jamming systems and a large canoe fairing below the fuselage and large bulge on top of the vertical tail.

The USAF F-111 also served in later wars like the Gulf War for precision bombing.  The USAF retired the F-111 in 1998, and the Australian RAAF was the last air force to use the type up to 2011. 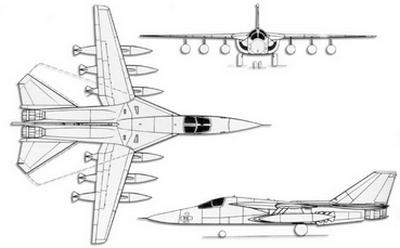 This aircraft is F-111E coded  "67-120" of the USAF in a camouflage scheme. It was also used by the 20 TFW  at RAF Upper Heyford and also used in operation Desert Storm. It is on loan from the United States Air Force Museum and from 1993 on display at the IWM museum at Duxford (UK).

Here a selection of USAF F-111 aircraft seen at various European air shows in the 1970s.

Several scale models of the F-111 have appeared over the years. In 1/144 kits from Arii, Academy/Minicraft , Otaki and Revell.  In the /172 scale old kits from Revell (also for a F-111B) and also Airfix but the best 1/72 kit is from Hasegawa (in various boxes). In 1/48 scale kits were released from first Aurora and later Italeri, AMT/ERTL, Academy/Minicraft, HobbyBoss.

This walk around page was first created March 2016 by M. de Vreeze