The Arado Ar 234 of the Second World War was the world's first operational jet bomber and reconnaissance aircraft. Development started as early as 1940 and the design showed a jet aircraft with two jet engines in underwing pods. This type of engine was new and problems were encountered, this meant that first flight was not earlier than July 1943. The first Ar 234 even saw combat, its first mission being a reconnaissance flight over the Allied beachhead in Normandy on August 2, 1944 ("D-day"). With a maximum speed of approx. 735 kilometers/hr (459 miles/hr), the "Blitz" was no match for Allied piston-engined fighters. It served with German "Kampf Geschwader" KG 76 and as reconnaissance aircraft it performed well. 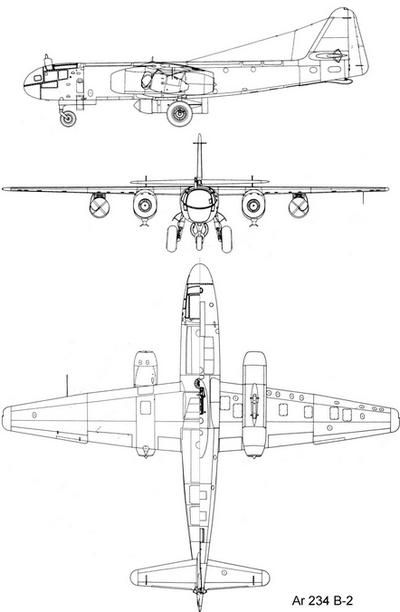 This aircraft is very rare and  is an Ar 234 B-2 . It served with German bomber unit KG 76 from December 1944 until May 1945, when British forces captured it near Stavanger in Norway. Turned over to the United States, it was brought to Wright Field, Ohio, in 1946 for flight testing. In 1949 it was transferred to the Smithsonian and put in storage, which restored it during 1984-89. This Arado is the sole survivor of its type! It has markings of 8. / KG 76 and now is on proud display at the Smithsonian at Dulles (Washington DC).

A few scale models of the Arado 234 have appeared over the years. In 1/72 scale first there was an old FROG kit, re-boxed later by Revell. A newer 1/72 kit is from Dragon. In 1/48 scale Hasegawa has a nice kit as well as HobbyBoss, Kinetic and Revell. A spectacular large kit in 1/32 scale is from FLY.