Walk around - Messerschmitt Me-163 Komet

The Messerschmitt Me 163 Komet was "rocket propelled" aircraft. It was designed by Alexander Lippisch in Germany during the Second World War. It was tested in 1941 and 1942 and became the only rocket-powered fighter aircraft ever to have been operational. Its design was revolutionary, and had performance unrivaled at the time. It could reach over 1,000 km/h (600 mph) with a speed record at 700 mph. Probably over 400 aircraft were built but the aircraft proved very dangerous to operate and fly by its pilots. It was armed with two 30 mm cannons. It really became used in 1944 as "fighter" and only a limited number of Allied aircraft were shot down by it. 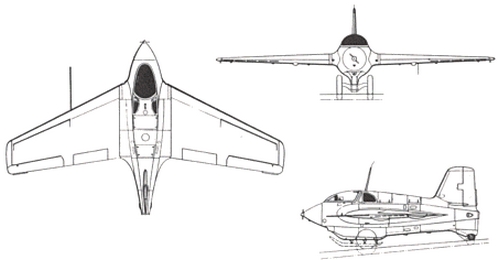 This unique Komet has werkenr. 191301. It is on display since 2011 in the Udvar-Hazy center of the Smithsonian at Dulles (Washington DC), USA.

This aircraft is a REPLICA and shown with werkenr. 191626. It is mostly built of wood. It is on display at in the Planes of Fame museum at Chino (CA.), USA.

Quite some plastic scale models of the Komet are available. In 1/144 scale such as from Armory , Takara, Dragon and KP. In 1/72 many kits like from Academy, Revell, Airfix / Heller, Lindberg, Pavla, KP, HobbyBoss and other obscure kits. In 1/48 kits are old kits from Hawk, Tesrors, Revell and from A+V , Dragon and Hasegawa. In 1/32 Hasegawa has a nice kit as well as MENG.

This walk around page was first published April 2016 by M. de Vreeze