The North American X-15 was a test aircraft to explore very high speed flight. Designed in the fifties, it got a rocket and small wings and was launched from a NB-52 mother ship at altitude. After the tets, it glided towards a long runway after the test for landing. For flight control, also smaller reaction thrusters were used and the tail had a wedge for better control at high speed. The 3 X-15 test aircraft were operated by the USAF and the NASA until 1968.

The X-15 set speed and altitude records in the sixties, reaching the edge of outer space and returning with valuable data used in aircraft and spacecraft design.It often reached an altitude of over 50 miles, being in fact a "space flight" with a record of 67 miles. The X-15 holds the official world record for the highest speed ever recorded by a manned, powered aircraft: a top speed of 4,520 miles per hour (7,274 km/h), or Mach 6.72. With the 3 X-15 aircraft 199 flights were made. 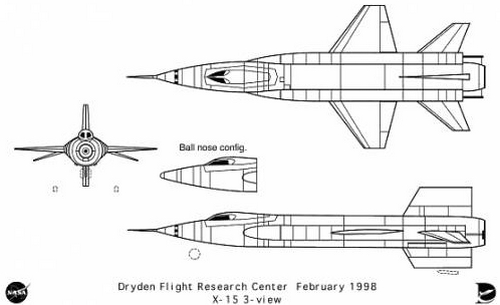 This X-15A-1 aircraft has Bureau no. 566670. It made 82 flights. It is on display at the Smitsonian National Air and Space museum, Washington D.C.

The first version of this page was published April 2016 by M. de Vreeze