Walk around - Boeing B-52 Stratofortress (4x)

The Boeing B-52 was designed in the fifties during the Cold War as an American long-range strategic bomber. The B-52 dubbed Stratofortress was subsonic and had a large bomb bay and also external weapon pylons could be fitted. Operated by the Strategic Air Command (SAC), also nuclear bombs could be dropped and the load can be over 70,000 pounds (32,000 kg) of weapons. Typical range is  8,800 miles (14,080 km) but capable of being re-fuelled in air, can be much longer. The YB-52 made its maiden flight in April 1952. It was a successful design and hundreds of aircraft were manufactured and the B-52 is also very good at simple "carpet bombing" also at medium altitude. It was upgraded over the years with several versions with now "new aircraft" manufactured but replaced structures and systems. The BUFF, as the B-52 is called by its crews, refuses to retire and even nowadays it probably will remain in service with the USAF for a few decades to come! 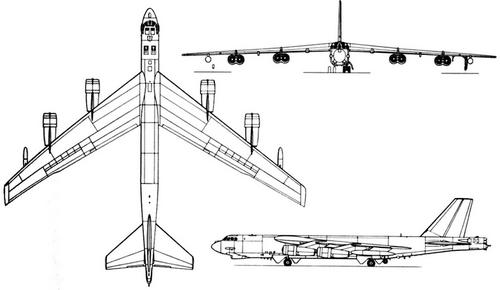 This B-52F coded 57-0038 was delivered to the USAF in August 1958. It served with SAC until 1961 and later used for weapon testing at Eglin including the AGM-28 Hound Dog missile. It is the only surviving example of a B-52 "F" model and was loaned to the Joe Davies Heritage Park in Palmdale (CA) for display.

This cockpit represents a B-52 and was probably used for training. It gives a good idea how a B-52 cockpit looks like. Display was seen at the Castle Air Museum, Atwater.

In 1/72 scale Monogram / Revell an impressive good model. The AMT/ ERTL 1/72 B-52 in various kits and boxes were also nice but the wing shape is a bit inaccurate. The latest 1/72 kit is from ModelCollect.

In 1/144 scale an old kit by Crown and now better Minicraft / Revell kits. A bold effort was an ID Model 1/48 vacuform kit! Various upgrades sets for 1/72 scale were also issued.

This webpage was first created May 2016 by M. de Vreeze