The F9F Panther was Grumman's first jet fighter. It was designed for the U.S. Navy to operate from aircraft carriers soon after the war. It had a straight-wing and jet engine and first flown November 1947. As U.S. Navy jet fighter it saw considerable service from carriers during the Korean War. It was quite a good aircraft and over 1,300 aircraft were built. The only other user was Argentina.

(Shortly after completing the design of the Panther, Grumman created the Grumman F9F6 Cougar, a straightforward swept-wing adaptation of the Panther). 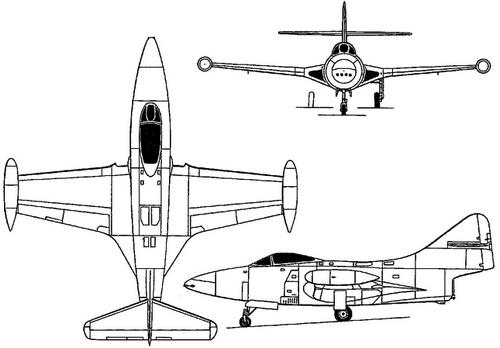 This F9F-2 Panther has a blue scheme and painted as VMF-311 aircraft . It is on display at the "Flying Leathernecks Aviation" museum at Miramar, California USA.

In 1/144 scale, Miniwing, OZ Mods and FE resin had a kit. In 1/48 the old Aurora, Hawk and AMT as well as Monogram-Revell and Hobbycraft had kits but now good kits are from KittyHawk and Trumpeter .

In 1/72 scale, the Hasegawa-Minicraft kit was for many years the only kit followed by the Matchbox (reboxed Revell) kit but now HobbyBoss also has a nice kit.

In 1/32, FISHER model and Pattern has a good resin kit of the Panther. (see Modelling Report club member Meindert here...)

This webpage was first created May 2016