The Bell Airacomet was the secret American project during the Second World War to obtain a jet aircraft. The design got first two General Electric I-A jet engines and the XP-59 was after completion transported fitted with a "dummy propeller" to Muroc Army Air Field (now Edwards AFB). The XP-59 flew from Muroc for the first time October 1942. Quite a number of this first American jet were made: 7 test XP-59, 20 P-59A and 30 P-59B versions. Performance was not spectacular and the type also had a lot of problems with the first jet engines that also later was became the GE J31. The P-59 was not used in combat but it provided the first jet experience for the USAF. 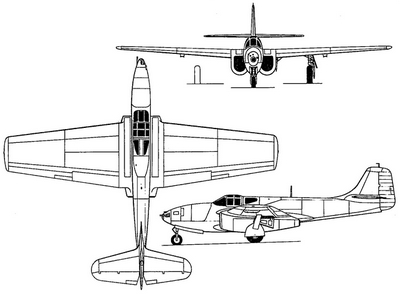 
This aircraft was a "production aircraft" P-59A-1 with s/n 44-22614. (Note that on the tail 42-22614 is painted but is was manufactured in 1944). It was accepted by the USAF on September 25, 1944 and was assigned to the 412th Fighter Group that was located at Muroc Army Air Field (now Edwards AFB). In November of 1945, the aircraft was transferred to March Field. Some five months later it was put out of service. Also used as an instructional airframe at a technical school in Santa Maria, California, it later went into storage.

It is the sole remaining P-59 and is on loan from the USAF museum. On display at March Field museum, Riverside, California USA.

A few scale models exist of the Bell P-59. In 1/48 scale from Hobbycraft and Collect-Aire. In 1/72 scale from first Rareplanes, Merlin, Karo-As and later Anigrand in resin, Amodel and now there is a nice Special Hobby kit.