The Northrop YF-23 ATF was designed for the USAF Advanced Tactical Fighter program to replace the F-15 Eagle. A prototype was made with "blended" shapes that was twin-engined, single pilot and internal weapon bays to attain low observable or stealth technology characteristics. Intakes and engine exhausts were "shielded" to avoid detection. It could fly over MACH 1.8 and had an internal weapons bay for missiles. The prototype was a sort of demonstrator and first flew in 1990 and two aircraft were built and tested for a year. But the ATF competition was lost to the YF-22 of Lockheed. (that later became the F-35). 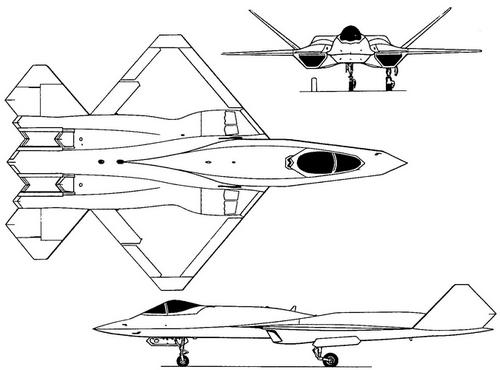 A few scale models have been issued of the YF-23. Revell and Trumpeter have 1/144 kit and in 1/72 scale Italeri, Dragon and Testors had kit. Collectaire has a 1/48 kit.