The Dassault Rafale was designed as a twin-engined fighter also featuring a canard on the intakes. It was designed in the 1970s to a multi-purpose aircraft requirement. A demonstrator flew in 1986. Problems and cost overruns occurred but eventually it was ordered for the French Armed forces. The engine is the SNECMA M88. Variants are: Rafale C single-seat land-based version, Rafale B twin-seat land-based version, and also developed was a Rafale M single-seat carrier-based version. Operational use started in 2001. The type has received various weapons and systems upgrades. France operates now over 130 aircraft. 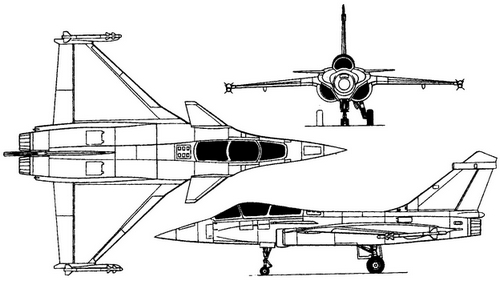 This is the fourth prototype aircraft "Rafale A 001". As technology demonstrator, it was used for "simulated" deck landings and was manufactured in 1985. This led to the decision to proceed with a naval Rafale Marine for use from French aircraft carriers. (the M was adapted for this role).

This aircraft is on display at the Musee de l'Air et de l'Espace at Le Bourget airport, Paris.

Plastic scale models of the Rafale are in 1/72 scale from Heller (prototype),  later Heller kit, Italeri / Revell/ Hasegawa/ Tamiya and a newer kit from Hobbyboss. In 1/48 scale from Heller, Revell and Hobbyboss with the Naval M from also Revell and reboxed by ACE / Hasegawa. In 1/144 scale from Trumpeter, Heller and ACE.