The SEPECAT Jaguar was designed as a close air support aircraft and later also for the nuclear strike role. It developed in a joint venture by British Aircraft Corporation and the French Breguet (later Dassault) company called SEPECAT. The Royal Air Force and French Armee de l'Air were the principal requirements drivers. The RAF needed replacements for the Hunters and Phantoms in the strike role and the French also had a gap for such an aircraft. Also, there was a need for a "navalised" Jaguar for use from French aircraft carriers.

The aircraft was a single seater but also a twin trainer version was developed. The first Jaguar prototype flight was in 1978.

Jaguar International was for export (ES / EB/ SN/ BN / SO / BO). A special version was for India the IM, a single-seat maritime anti-shipping aircraft that could fire the Sea Eagle anti-ship missile. 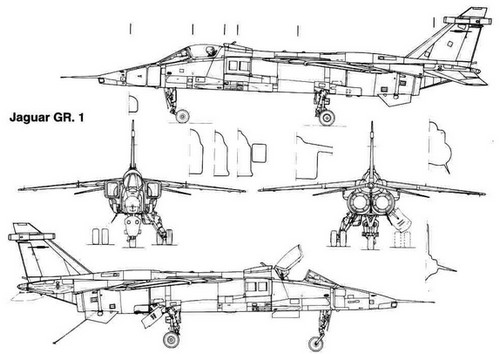 This two seater Jaguar E coded "F-E3" is of the Armee de l'Air. This aircraft is on display at the Musee de l'Air et de l'Espace at Le Bourget airport, Paris.

This Jaguar A coded "A-1" is also of the Armee de l'Air. This aircraft is on display at the Musee de l'Air et de l'Espace at Le Bourget airport, Paris.

A selection of French Armee de l'Air Jaguars seen at European air shows in the eigthies.

This Jaguar coded "XZ396" of the Royal Air Force was delivered as a GR.1. It was later upgraded to GR.3A. Seen in a very good restored condition in a pink "Desert Storm" scheme. Seen at the Pima Air & Space museum, Tucson (Az.).

Several plastic scale models of the Jaguar have been released:  in 1/72 models from FROG, Heller and another from Airfix, Matchbox and kits as well from Italeri/ Revell and Hasegawa (both single and two seaters).  In 1/100 by Heller and in 1/144 by Academy, LS and Arii. In 1/48 by Airfix / Heller, Revell and Kitty Hawk. In 1/50 also by Heller including the Jaguar Marine.