The French Dassault Mirage F1 was designed as a fighter and secondary attack aircraft with first flight end 1966. It is powered by a single SNECMA Atar turbojet and can carried a wide variety of weapons. It was ordered by the French Armee de l' Air and it entered service in 1974 where it replaced the Mirage III series. There is also a two seater trainer, the F1 B/ D. The type was used in various conflicts and proven to be a good aircraft.

It was exported to many other countries with more than 700 Mirage F1 aircraft being manufactured. Some are still operational today. 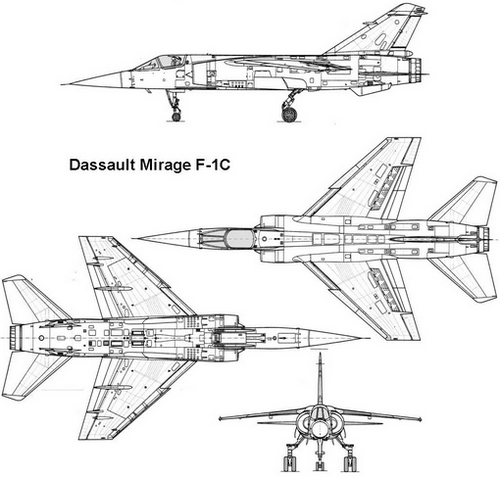 This F1C is a former French Armee de l'Air aircraft and served at various escadrons. Now painted in a desert like scheme coded "33-LA" , probably of Esc 4/33 "Vexin".  It is on display at the Legermuseum at the Jubelpark in Brussel (B).

This is a very special display of the Mirage F1 that shown the main systems and interesting details. This exhibit was seen at the Musee de l'Air et de l'Espace at Le Bourget airport, Paris.

Plastic scale models of the Miraga F1 are in 1/72 scale from Heller (single and two seater), Airfix and Hasegawa (also issued by Revell) and a recent good kit is from Special Hobby. In 1/48 scale from ESCI, Italeri and now Kitty Hawk has a nice kit.

This walk around page was first created Summer 2016 by M. de Vreeze