The Mirage III (or Mirage 3) was the answer by Marcel Dassault to a French requirement for a supersonic jet fighter aircraft in the fifties. It was fitted with a large delta wing which became a trademark of the Dassault Company and for the famous Mirage series. Delta wings were used because of their good high speed capabilities at the cost of low speed field performance. You will find no horizontal stabilizer on this plane!

The Mirage III can be considered a competitor of the American Lockheed F-104 Starfighter and adversary of the Soviet Mikoyan MiG-21 in the Cold War of that period.

Of the Mirage III various variants appeared including the Mirage V ground strike fighter. Usually the engine was a SNECMA Atar 09 version with afterburner. Intakes have a moveable half shock cone. The ejection seat is usually a Martin Baker RM4 seat (license built by the French Hispano Suiza). Usually canon armament were two 30mm DEFA cannons below the intakes.

Mirages were also often upgraded and modernized during the years. Sometimes even canards were fitted. In Israel the Mirage was used for their own later fighter development, the IAI Kfir. 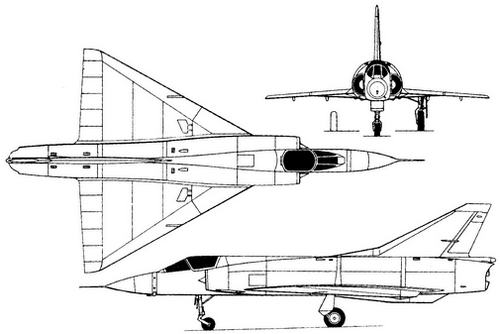 This aircraft was one of the pre-series of the Mirage III, the A 001. It was the first European aircraft to fly over Mach 2 in October 1958. The evolving Mirage III series aircraft put later into production were quite adapted e.g. with a longer fuselage and a radar nose. This pre-serie aircraft is on display at the Musee de l'Air et de l'Espace at Le Bourget airport, Paris.

This Mirage V BA , coded "BA",  is a dedicated fighter-bomber and has no radar but was fitted with a better navigation system. It wears a camouflage scheme with Fed.Std colours 34102, 30219 and 34064. Flown by the Belgain Air Force during the 1970s and 1980s, it is now on display at the Legermuseum at the Jubelpark in Brussel (B).

Plastic scale models of the Mirage III and V have appeared in various scales. To list a few: Heller had a 1/100 kit as well as Tamiya. In 1/72 scale Heller, Airfix , Revell, High Planes and short-run AMT . In the odd scale 1/50 from Heller, Fujimi. In 1/48 from obviously Heller but also ESCI, Academy/ Minicraft , Fujimi, Italeri, Fonderie, Kinetic and later Eduard with a good kit. In 1/32 first the old Revell kit but now also a good Italeri kit in the 1/32 scale.