The Douglas company was successful with prop aircraft DC-3, DC-4 and DC-6. After the war the jet emerged and Douglas wanted a large jet airliner. The DC-8 was developed in the 1950s starting with a design for about 80 passengers and with 4 JT3 engines. First flight was May 1958 and over a hundred were already on order by airlines. Several series were produced for Airlines over the years and the "Super DC-8" was a long aircraft with over 250 passenger capacity. The aircraft was widely sold with over 500 aircraft manufactured. KLM Royal Dutch Air Lines also used several versions. 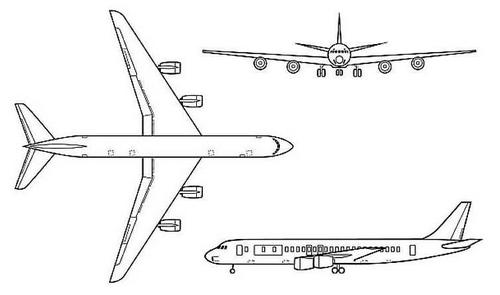 This is a special military version of the DC-8 is a serie DC-8-33 used for electronic surveillance. It was used by the French air force (Armee de l' Air). This Sarigue aircraft "F-ZARK" was operated until 2001 and now is on display at the Le Bourget museum "Musee Air et Espace" at Paris.

A few scale models were released of the DC-8, often the old kits in odd scales. Several different kits had different versions. By Heller in 1/125. In 1/100 by Doyusha, Nitto, VEB Plasticart. In 1/143 by Revell-Lodela. In 1/144 by Eastern Express, Welsh vacu and Minicraft. Nitto had also a 1/200 kit. In the large 1/72 a special mixed kit with vacuform by Aircraft in Miniatures.