The Fiat G.91 was designed as in Italy as jet fighter by Fiat (that later merged into Aeritalia). It started with a NATO-organised NBMR-1 competition in 1953 for a "Light Weight Strike Fighter" for NATO air forces. First flight was August 1956 and it won the competition. It was put into production and several versions produced both single and two seaters like the G-91T. The G.91 entered service in 1961 with the Italian air force. Also, the West German Luftwaffe and the Portuguese Air Force adapted the type. Over 750 aircraft were manufactured in several versions. A twin engined version was later the G.91Y. 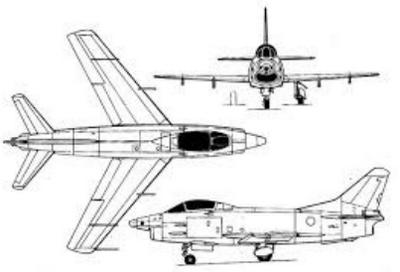 This is a G.91 T/1 trainer version. This particular aircraft has the markings of the Italian airforce "60th Air Brigade" with code 60-57 and no. M.M.6357. It is exposed outside the Aeroclub "F.Baracca" near Lugo, Italy.

Several scale models were made of the G.91. In 1/100 by Heller and FROG-Tamiya. Miniwing had a 1/44 kit. In 1/72 scale by Airfix, Aeroclub and recently MENG. Matchbox-Revell had a twin engined G.91Y model. In 1/48 by ESCI, Italeri, AMK and ADV. A rudimentary vacuform was issued in 1/32 by ID Models / Tigger and a very expensive 1/32 resin model by Dayglo.

This walk around page was created October 2016 by M. de Vreeze ;   note the Copyright!