The Dassault company designed a fighter bomber that had more capability than their older Ouragan in the 1950s. The Mystere got a swept wing and eventually a Tay engine giving it a maximum speed of 1060 km/hr. First flight was in 1951 and it was set into production until 1957. Standard armament was 2 Defa 30 mm canons and pylons for dropping bombs or firing rockets. The version Mystere IVA got a "Verdon" engine and could fly over MACH 1. It was used by the French Armee de l'Air and also some by the Israeli air force. 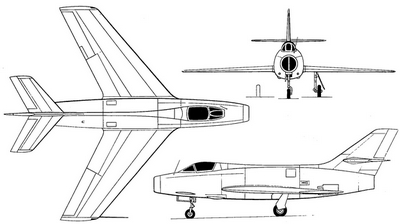 (The experience obtained with the Mystere eventually led to the later bigger Super Mystere).

This Mystere I (Type MD 452) aircraft is the prototype from 1953 and has a natural metal scheme and appropriately coded "O1".  It is on a splendid display at the Le Bourget museum "Musee Air et Espace" at Paris.

This Mystere IVA (type Dassault MD 454) aircraft was a former French Armee de l'Air aircraft and has a natural metal scheme with code "2-EY".  It is on display at the Le Bourget museum "Musee Air et Espace" at Paris.