The Dassault company used experience of the Mystere to develop a more powerfull aircraft that also could fly over MACH1 in level flight. The Super Mystere was a larger aircraft and got a new thin swept wing and the use of an afterburner. First flight was in 1955 and it was in production until 1977. It had 2 DEFA 30 mm canons and 4 pylons for bombs, MATRA rocket pods, drop tanks but also air to air missiles. It was an important fighter-bomber of the French Armee de l'Air in the 1960s until 1977. Some 180 aircraft were produced. It was also used by the Israeli air force from 1958 and second hand in 1976 sold to Honduras that used it until 1996. 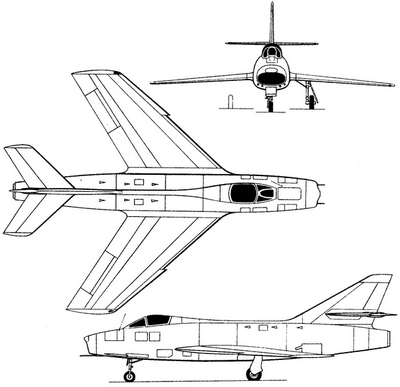 This Super Mystere B.2 has a camouflaged pattern and was used by the French Armee de l'Air.  Coded "12-YY".  It is on display at the Le Bourget museum "Musee Air et Espace" at Paris.