The Dassault company of pioneer Marcel Bloch after the Second World War started a private venture to produce a jet powered fighter-bomber aircraft. The design used a licensed Nene jet engine but still not a swept wing and could fly a max speed of 930 km/hr. Called Ouragan MD.450, it became the first French produced military jet aircraft. It first flew beginning 1949 and it was introduced in 1952 with over 350 aircraft delivered to the Armee de l'Air. Standard armament was four Hispano-Suiza 20 mm canons and two pylons for bombs or unguided rockets. It flew also with the demonstration team "Patrouille de France".

It was soon replaced by the Mystere and the last French Ouragan flew in 1961. The type was also exported to India with some 104 aircraft, El Salvador with 18 aircraft and Israel with about 75 aircraft that used the type in various Middle East wars. 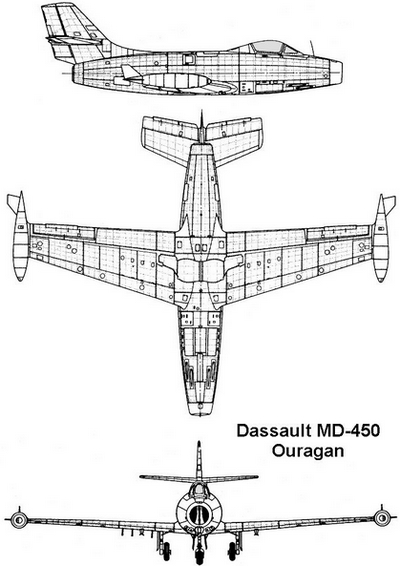 This Ouragan MD.450 has code "4-LT' / 154 with a natural metal scheme. The aircraft is on display at the Le Bourget museum "Musee Air et Espace" at Paris.

This MD.450 aircraft has code "UQ" / 320 and was used by the French Armee de l'Air . It is on display at the Brussels air museum at the Jubelpark in Brussel.

A few plastic scale models were released. In scale 1/48 by JMGT. In 1/72 by Heller and later a short run by Valom.