The Soviet Tupolev Tu-16 was a twin engined strategic bomber and appeared in 1954. NATO gave it the name "Badger". The maximum speed was approx. 1000 km/hr and the range 7200 km. Several versions were developed in time and China manufactured the type as well as Xian H-6 starting in 1958. It was one of the first jet bombers capable of firing a sort of stand-off/ anti-ship missile. (A civilian passenger aircraft version was the Tu-106 which was quite a different aircraft though).  Badgers were also sold to Soviet friendly countries. 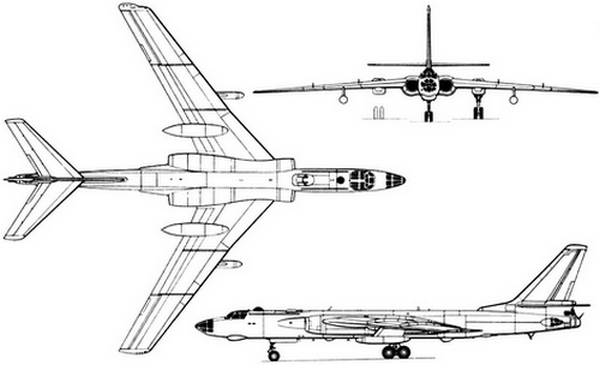 The Tu-16 KS was capable to lauch 2 KS-1 / AS-1 missiles and the first was manufactured mid 1950s. Some 26 Tu-16 KS-1 aircraft were delivered by the Soviet Union in the 1961- 1962 to the Indonesian leftist regime. The Indonesian air force TNI-AU operated them from the base a Madiun in East Java. They were probably put out of service in 1969. This aircraft Tu-16 KS-1 coded "M-1625" shows a KS-1 anti-ship missile and inside the museum another red coloured KS-1 missile is seen. All are preserved at the Indonesian Air Force Museum "Pusat TNI AU Dirgantara Mandala" at Yogyakarta in Central Java, Indonesia.

and the Soviet manufactured Raduga KS-1 / AS-1  "Kennel" missile in more detail:

Amodel has a detailed kit of the KS-1 Kometa missile.