The Convair F-106 Delta Dart was designed in the 1950s as a continental all-weather interceptor aircraft primarily for the USAF. Using experience of the F-102 Delta  Dagger, a complete new design was made to avoid high speed drag. It had a large missile bay to carry the armament and first flew mid 1959. Capable of over MACH 2 at high altitude, it was supposed to intercept Soviet bombers with a range of about 2,900 km. Usual armament was the Falcon missile or even a "nucleair tipped" Genie missile. A few versions were developed with minor differences but a trainer version F-106B double seater was also developed.

Initially the F-106 had no canon being an all missile aircraft. Based on Vietnam experience, in 1972 an upgrade was made with a gun pack capability in the center weapons bay and a new canopy introduced for better pilot visibility. It was however not often seen with this gun pac. The F-106 only operationally flew in the Continental United States. The Air National Guard used the type until 1988. 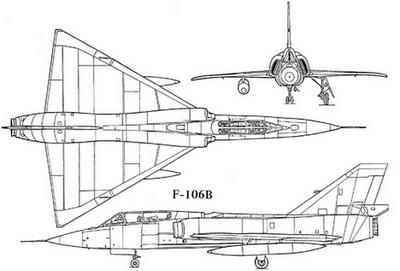 This two seater aircraft F-106B " 59-0158" is shown in USAF 329 FIS markings. It has a sun protected overcoated canopy and was seen on display at the ‘Century Circle’ display of the AFFTC museum at the West Gate to Edwards AFB, CA, USA.

Several plastic scale models of the F-106 were released. In 1/144 scale an old kit by Revell and an odd scale 1/77 Revell kit.  In 1/48 by Monogram and Revell and reboxed by Hasegawa while Trumpeter has a more up to date kit. In 1/72 scale the old FROG and Minicraft-Hasegawa kits, Trumpeter and now a superior 1/72 kit by MENG. In 1/32 scale no kits are known.

The first version of this page was published January 2017 by M. de Vreeze