The Northrop T-38 Talon is a two-seat, twin-engined supersonic jet trainer. First flight was in 1959 and it was developed in conjunction with the F-5 program by Northrop. Developed for the USAF, it was the world's first supersonic trainer. Though looking like the F-5B two seater it is quite different, mainly in wing, intakes, nose and systems. Over 1,100 T-38 Talons were produced and most USAF pilots were trained on this jet trainer for over 50 years with hundreds of Talons flying.
A special role was that some T-38 were painted in Agressor like paint schemes.
Based in the USA, West Germany used the type for training their pilots in the USA as well and some T-38 aircraft were sold to Turkey. 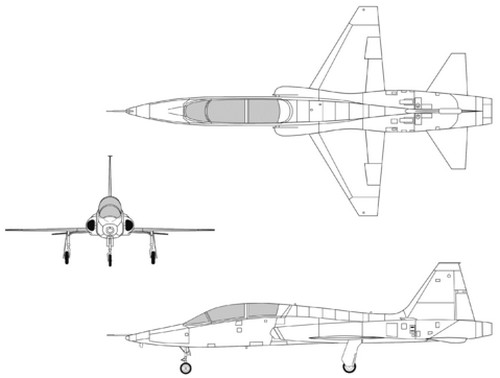 This two seater T-38 coded "81196" is a former USAF trainer. Later it was used by the CalTech university. Now on display at California Science Center, Los Angeles, USA.

This operational T-38A coded "64301" of the USAF has a special very glossy black livery with red outlined markings. Many details of the complex canopy mechanisms are seen. It also shows "German" markings on the pylons, suggesting training use for Germany. This particular aircraft was seen at Nellis AFB.

This T-38A "63182" has a standard trainer white USAF scheme. It was delivered to the USAF in June 1964 and used by e.g. the 3550th Pilot Training Wing at Moody AFB. Now on display, with a covered canopy against the sunshine, seen at the Joe Davies Heritage Airpark at Palmdale, Ca.

Some schemes shown are for T-38 aircraft painted in Agressor like paint schemes.

A few plastic scale models have appeared over the years. In 1/72 scale the Hasegawa-Minicraft kit was the only option for many years with PM having also a very basic kit. Far better now is the 1/72 Sword kit.

This walk around web page was first created February 2017 by M. de Vreeze