The McDonnell company developed the F2H Banshee rather in parallel with their first FH Phantom naval jet. The new F2H single-seat carrier-based jet fighter aircraft was much larger and heavier and had a pair of J34 jet engines. First flight was January 1947. Called the Banshee, it was used by the United States Navy and United States Marine Corps from 1948 to 1961. It also flew in the Korean war.  Nearly 900 aircraft were manufactured in several versions. The F-2H-2 was a night fighter with a long nose with a Sperry radar. 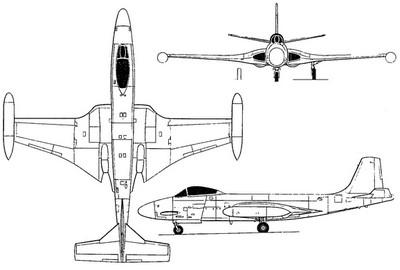 This F-2H-2 night fighter Bu.no 124988 has MARINES VMF-122 markings and LC tail code. It was seen outside on display at the Flying Leatherneck Historical Foundation and Aviation Museum, Miramar, CA.

Various plastic scale models exist of the Banshee. In 1/144 scale from Miniwing. In 1/72 Airfix, Academy and Hobbycraft released kits as well as "Pro-resin" and Sword short run kits from 2014.

The first version of this page was created March 2017 by M. de Vreeze