The Douglas company designed after the Second World War a jet interceptor aircraft with a radar and missiles. It had a crew of two including the radar operator and would be able to operate at night hence the nickname. First flight was March 1948 and several versions were developed that had Sparrow missile armament. The engines were two Westinghouse J34 jets giving it a maximum speed of about 900 km/hr. It flew also in the Korean War with the US Navy and US Marine Corps. It even flew later in Vietnam in an electronic warfare role. The US Army used some aircraft for missile tests. Only about 265 aircraft were manufactured and the type was also known as the "F-10". 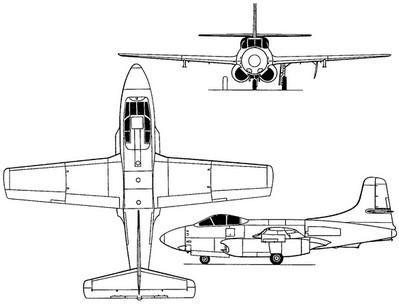 This Skyknight is a F3D-2 Bu.no 124630 and is the second production version from 1951. It flew in Korea and later at China Lake for missile testing also by the Rayhteon company. This Skyknight was seen outside on display at the Flying Leatherneck Historical Foundation and Aviation Museum, Miramar, CA.

Various plastic scale models exist of the Skyknight.  In 1/72 scale Rareplanes had a vacuform kit as well as Airmodel with later a Matchbox injection kit release with now a good Sword short run kit.  In 1/48 models a vacu form was from Combat Models with now an injection kit of CZECH/Encore. A very basic vacuform model was from ID Models / Tigger.

The first version of this page was created March 2017 by M. de Vreeze