The Northrop F-20 (or F-5G) was based on the the successful 5E / F Tiger series. Northrop wanted to enter with a low cost fighter the market with a capable fighter jet also for the "FX" program. Known as the Tigershark it got a single powerfull General Electric F404 engine and it was also intended to get new systems and avionics. First flight of the F-20 prototype which was basically a re-engined F-5E was August 1982. Taiwan had a serious interest for its air force but that was blocked. Eventually only 3 were manufactured and none was sold to any air force. 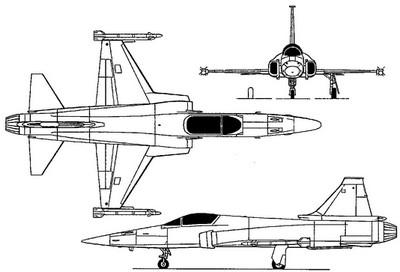 This F-20 has serial 82-0064 (Northrop serial number GI.1002). It is the only remaining F-20 aircraft and it is kept at the California Science Center in Exposition Park, Los Angeles, California.

This walka around page was first created March 2017 by M. de Vreeze