The Lockheed U-2 was initiated by a CIA covert program in the highest secrecy in the 1950s. The design was made by Kelly Johnson of the Lockheed "Skunk Works" and it had code name AQUATONE. To stay out of reach of ground-to-air missiles, the U-2 would fly at extreme high altitudes at about 70,000 ft (21.000 meters) though not very fast. First flight was in 1955 and the unique role of the U-2 meant it remained in secrecy for many years, starting to fly from the new secret CIA facility of "Area 51" in Nevada. (Later Area 51 was transferred to the USAF). Early versions of the U-2 were involved in several top secret events through the Cold War, being flown over the Soviet Union, China, Vietnam, and Cuba. In 1960, Gary Powers was shot down in a CIA U-2A over the Soviet Union by a surface-to-air missile, causing large propaganda publicity during the Cold War. Another U-2 was lost in a similar fashion during the Cuban missile crisis of 1962.

The type was also later seen in Europe at air shows and the engine provided a unique "howl noise" during its steep take-off.

U-2 aircraft were modified throughout their service life. Using the basic design of the U-2, much more modernized versions for reconnaissance were the TR-1, U-2R and U-2S (of the 1990s!). These often carried additional pods on the wing and were significantly larger and looked quite different. 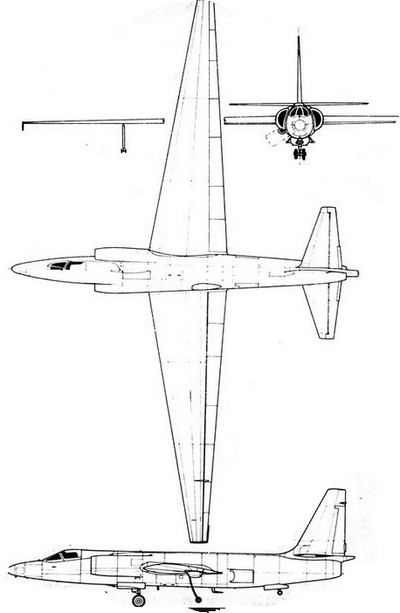 This U-2C "66-680" has a special grey pattern and flew its first operational spy mission over the USSR on 4 July 1956 (so before Gary Powers was shot down). It is now on display at the National Air and Space Museum in Washington, DC.

This two seater U-2D "56-6721" was constructed as a U-2A article "388" in 1956 at Oildale, Ca. It flew with the 4080 Recon Wing at Laughlin AFB, El Rio, Texas. It was in 1959 modified to accommodate a second system operator crew member to detect Soviet ICBM attacks. It was later used for various other tests and programs and has a black scheme. Retired in 1980, it is now the only remaining U-2D. It went to various museums like March AFB museum but now it is on display at the Blackbird Air Park at Edwards AFB, Ca. (USA).

A jet engine is also seen on display but that seems to be a J75 (not used in the U-2D).

This U-2S  "Dragon Lady" bur.no 80-0713 is of the 99th Reconnaissance Squadron / 9th Reconaissance Wing (USAF). The U-2S is a redesignation of the TR-1A and U-2R aircraft with updated General Electric F118 engine and systems. This is a fully operational aircraft and the paint is rather worn. This aircraft was/is deployed all over the world such as the U.K. Here it was seen at Nellis AFB, Nevada, USA.

Quite some plastic scale models exist(ed) of the U-2, first in odd scales. In 1/48 Hawk had an odd kit as well as Italeri and later HobbyBoss. In 1/72 Airfix came with a good kit after an earlier Rareplanes vacuform. ID models had a rudimentary vacu 1/32 kit.

This walk around page was first created May 2017 by M. de Vreeze