The Sukhoi OKB design buro started the design for a new generation air superiority fighter in the early seventies.  (At the same time, in the USA the F-15 Eagle and F-14 fighters were developed). Known as Type T-10, the twin engined design went through a number of various modifications. First flight was May 1977 with service entry with the USSR in 1985. The later designation was SU-27 (Russian: Сухой Су-27) and it got the NATO reporting name "Flanker". There is also a two seater SU-27UB version and even a navalized SU-33 version though made in small numbers. Later the type evolved in many new types with modernized systems, other roles and advanced engine technology. Sometimes canards were fitted and even a trust vectoring version exists with suprior manoeuvrability performance. Note that the type designations are for a family of aircraft from SU-27, 33 up to later generation SU-35. Probably over 1,000 Flankers have been produced up till now. 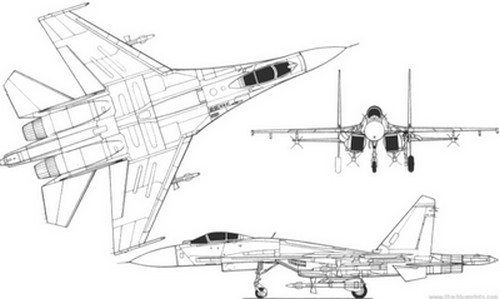 Two Sukhoi SU-27 aircraft of the first generation appeared at the Paris Air Show in 1989 at le Bourget, Paris. That was quite a surprise as it was 4 years after service entry and first time the type could be seen from nearby in the West. (Also many other Soviet aircraft were present). SU-27 aircraft shown here are "blue 389", which is a two seater SU-27UB and "388", being a single seat SU-27A (T10-41).

Several plastic scale models were released. Revell, Dragon and later Trumpeter had 1/144 kits. In 1/72 the first good kit was from Hasegawa with earlier kits from Airfix, Heller and Revell. More recently, Zvezda has released very good kits in 1/72, also of the later generation Flankers. In 1/48 Academy, HobbyBoss, Trumpeter and now Eduard have kits. In the 1/32 scale a large kit was released by Trumpeter (also of the later generation).

This walk around page was created May 2017 by M. de Vreeze