Walk around - Sud Aviation SO.6000 Triton

The French company Sud Aviation (SNCASO) also made an entry into the jet age with a trainer. The Triton was designed as a trainer and had a side by side seating. The SO.6000 design began in 1943, as a clandestine project due to the German occupation. First flight was November 1946 with a JUMO engine installed. Five prototype aircraft were ordered and the type would get a Nene jet engine. The air intakes were at the sides. But further development was stopped and the aircraft never put into series production. 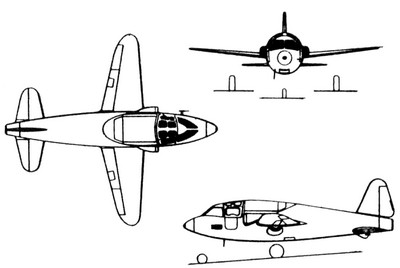 This Triton is coded  F-WFKY and prototype no.3. It was seen inside the Le Bourget museum "Musee Air et Espace" at Paris.

A few plastic models were issued of the Triton. In 1/72 by Dujin and a crude short run kit from MACH2.

This walk around page was first created June 2017 by M. de Vreeze ;   note the Copyright!