The Mitsubishi J8M1 Shusui ("Sharp Sword")    三菱 J8M 秋水  was a copy of the German Messerschmitt Me.163 Komet. A last effort was made in 1944 to provide the Japanese mainland a rocket fighter and Germany provided assistance. Shipping a complete Komet or even some main parts proved impossible as submarines were sunk before they arrived in Japan so the local Shusui was made with drawings and German blueprints. The type was designated J8M by the Navy use and Ki-200 for planned Army use.

Seven aircraft were in several stages of completion end 1944/1945, but it all was too late for Japan. The prototype aircraft, with a Toko Ro.2. rocket engine copy made in Japan, did a first flight on July 7 1945 but crashed during landing killing the pilot. 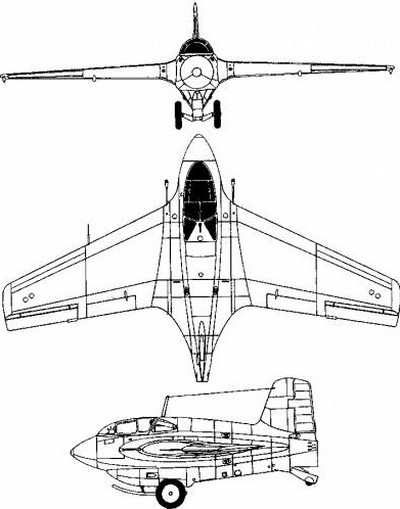 This J8M1 Shusui is original and was one of two aircraft that were taken after the end of the War in November 1945 from Yokosuka to the United States for evaluation aboard USS Barnes. This airframe FE-300/T2-300 (Japanese code 403) was restored and is now exhibited at the Planes of Fame Museum in Chino, California.

A few plastic models appeared over the years in various scales. In 1/72 fine kits from Hasegawa and PitRoad. In 1/48 scale from FineMolds.