Walk around - Convair B-58 Hustler

The CONVAIR B-58 "Hustler" was designed as a supersonic bomber for the USAF in the 1950s in the Cold War. First flight was November 1956. It had modern systems for its role, a thin fuselage and a large delta wing with four engines in under wing pods.  A large external droppable pod was fitted under the fuselage that contained extra fuel and a nuclear weapon along with other mission-specific gear. Later versions were fitted with reconnaissance equipment in place of the armament to form the "RB-58A" mark. Crew accommodations for the B-58 Hustler consisted of a pilot, navigator / bombardier, and defense systems operator - all sitting in tandem within escape capsules. A "TB" trainer version was also used.

The B-58 set several speed and altitude records with a top speed of no less than 2,100 km/hr at altitude. But it had a large fuel consumption and limited strike range. Some 86 B-58's were used as bomber by the USAF with another 30 aircraft for testing and other roles. It was retired in 1970. 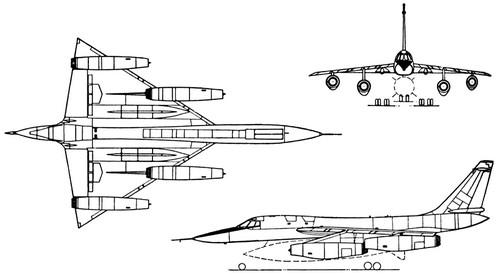 Model kits: various plastic models have appeared over the years of the B-58.  The older kits had odd scales. Academy and Hobbycraft had 1/144 kits and in 1/72 there is the Italeri (also released by Testors) kit of B-58 Hustler and TB-58 Boomerang trainer. Monogram/ Revell have a larger 1/48 kit.

This webpage was first created September 2017 by M. de Vreeze ;   note the Copyright!