The Boeing EA-18G Growler is a special developed version of the two-seat F/A-18F Super Hornet. The EA-18G replaced the Northrop Grumman EA-6B Prowlers in service from aircraft carriers of the US Navy. The Growler systems and electronics are primarily provided by Northrop Grumman. EA-18G began production in 2007, with first aircraft becoming operational in the US Navy September 2009. 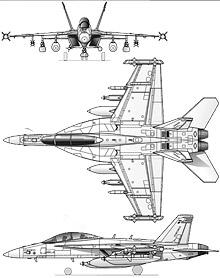 This Growler Bu.Aer no 168388 of US Navy squadron VAQ-138 was seen during an Open Day at Nellis AFB, Nevada.

Some plastic scale models available:  in 1/144 from Dragon/Revell. In 1/48 by Academy/Italeri/Revell and Hasegawa. A very spectacular kit is the 1/32 scale Trumpeter kit. In 1/72 Hasegawa has a kit.

The walk around page was first published December 2017 by M. de Vreeze.