The Lockheed company also started to develop jet aircraft in the 1940s with the P-80 and T-33. The F-94 Starfire was based on the T-33 but with an all-weather, day/night interceptor role. It was signifantly changed and got first a J33 engine and the first flight was April 1940. The USAF started operating it May 1950 with their Air Defense Command amidst the Cold War. It was the first jet-powered all-weather fighter to enter combat during the Korean War in January 1953. Some 850 aircraft were manufactured of various versions. The F-94C had a thin wing and swept tail surfaces and a J48 jet engine and rocket armament.

The type was only used a few years, being replaced by the F-89 Scorpion and F-86D Sabredog. Some F-94's went to the Air National Guard. 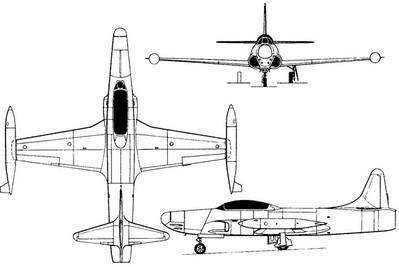 This F-94C Bur.no 51-5623 is on display outside at the Pima Air Museum near Tucson (AZ). The cockpit has inside sun protection foil.

Several plastic scale models of the F-94 are available. First old kits in odd "fit in the box" scales. In 1/48 scale from Collect-Aire, Hobbycraft and recently a Kitty Hawk kit. In 1/72 scale by Heller of the F-94B and EMHAR with a F-94C.

The walk around page was first published December 2017 by M. de Vreeze.