The Avro Vulcan was developed as one of the 3 V-bomber series in the 1950s (that included the Valiant and Victor). The British aircraft manufacturer A.V. Roe and Company (Avro) designed the Vulcan in response to Specification B.35/46. Test aircraft in the program were developed: Avro 707 and 710 to test the configuration. The design eventually got a large delta wing with four Olympus engines in the wing roots, a large bomb bay.

The Vulcan prototype made its first flight in August 1952. Deliveries of the actual Vulcan started in 1956 to the Royal Air Force (RAF) with several versions being developed that also included major wing changes (particularly in the leading edge planform). The B.2 had more powerful engines, a larger wing and better systems for self defense. Many could also fire the Blue Steel missile. Bomb loads could be nuclear but also conventional. Some were also used in maritime missions and a few were converted as K.2 tankers. Vulcans were used in various conflicts by the RAF over the years. The last Vulcan, of some 136 manufactured aircraft, flew with the RAF in 1984. 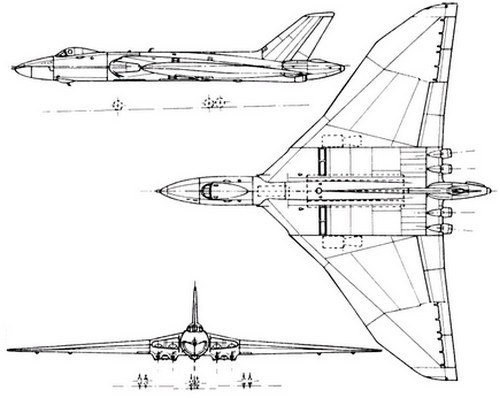 This Vulcan B.2, coded XJ824 was manufactured beginning 1961. It served with several RAF squadrons. It can be seen since 1982 at the Imperial War Museum at Duxford, U.K.

This Vulcan B.2, coded XM605, was completed end 1963 and delivered to RAF no. 9 squadron. It served with several RAF squadrons. In 1981 is was given to the USAF museum. It is on display in now a pretty worn scheme at the Castle Air museum, Atwater, Ca.(USA)

Several plastic kits were released over the years. Old ones were in odd scales like Lindberg/Frog in 1/96 and Tamiya in 1/100. In 1/72 scale there was an old Rareplanes vacuform from 1978 until the classic 1/72 scale Airfix kit came in 1983 (also in MPC box). Aeroclub has a large 1/48 vacuform and in the smaller 1/144 scale kits are available from Pit Road and Great Wall Hobby.

This walk around page was first created December 2017 by M. de Vreeze