The EWR VJ 101 was developed in the end 1950s and 1960s in West Germany as a vertical takeoff/landing (VTOL) fighter aircraft. VJ stood for "Versuchsjäger". The design had the potential of a fast MACH 2 fighter and was aimed at replacing the F-104. EWR was a joint venture of several German manufacturers and Rolls Royce developed the VTOL type engines. The VJ 101 had sort of "fly by wire" for control and 6 engines:  2 RB145 in the fuselage and 2x2 RB145 engines in 2 nacelles. 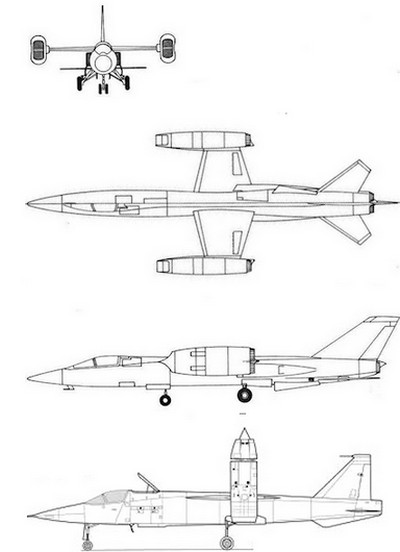 This drawing shows below the prototype layout and above how the envisaged MACH 2 fighter would look like.

This prototype X-2 flew first June 1965. It was preserved and is on display at the Deutsches Museum, location Flughtwerft Oberschleissheim near Munich.

A few 1/72 plastic and resin scale models were released by Anigrand and MaModell. A nice injection moulded kit was released by the "new" brand A&A Models in 2017.

This walk around page was created February 2018 by M. de Vreeze