The Lockheed F-80 Shooting Star was after the Second World War the first combat capable American jet fighter. Designed in secrecy by the famous designer Kelly Johnson and his team in just some 150 days, first flight was January 1944 as the XP-80. It was fitted with an Allison J33 engine giving it a top speed of 960 km/hr. First designated Pursuit P-80, it later was Fighter redesignated F-80 and first used operationally in the Korea War. It was also operated in Europe by the USAF during the Cold War. The US Navy used the type as "TO"or  "TV". Some 1,700 aircraft were manufactured and under the MDAP it was also used by various other countries. 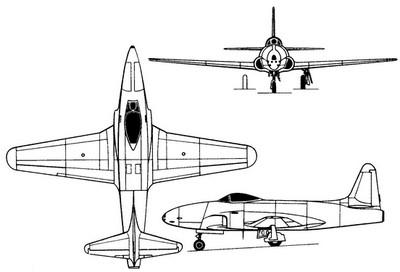 Many plastic scale models were released of the P-80 / F-80. In 1/144 scale OzMods had a kit.  In 1/72 scale the old Airfix model (also in a MPC box) has now been superceeded by a better representation by Sword though still short-run. In 1/48 Monogram had a kit with now an improved Hobbyboss offering. In 1/32 Collect-Aire had a resin kit with later Czech Model releasing an injection moulded short-run kit.