The Soviet Mikoyan-Gurevich MiG-19 was designed after the Second World War as type "I-340" and it was to be fitted with 2 jet engines for better reliability and more power. The test aircraft were followed like the SM-1 and SI-02 and there were many difficulties, jets were still rather new technology. In 1952 the SM-2 followed which was quite a new design with AM-5 / Tumansky RD-9 engines and the SM-2B can be considered the first MiG-19 prototype. But there were still problems and a production order was not given before 1954 for the MiG-19. From 1956 about 5,500 aircraft were manufactured in a various versions with different radars and armament. They were also used by the Soviet allies and also license made as the Aero S-105 in Czechoslovakia and in China by Shenyang as the J-6 (including the only trainer two seater JJ-6). It was also used during the Vietnam war, 1967 Six Day war in the Middle East. It had the NATO code name "Farmer".  (China developed the J-6 further as a dedicated ground attack aircraft as their A-5 / Q-5 Fantan). Some MiG-19 jets were still flying in North Korea and Zambia as of 2014. 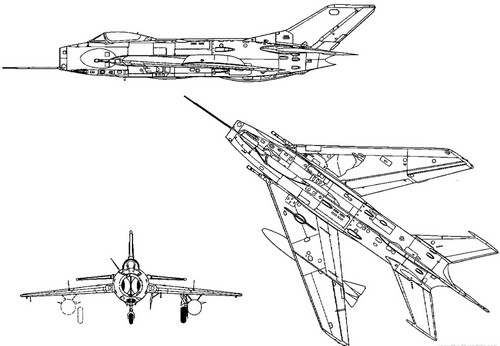 This aircraft has the code "905" and was seen outside at the "Muzeum Lotnictwa Polskiego w Krakowie", Krakow, Poland. It is in a rather "weathered" condition.

This is an opened up instructional air frame of the MiG-19. It was seen at the National Institute for Aerospace Research (INCAS), Bucharest, Romania.

A few plastic scale models exist of the MiG-19. In 1/144 scale Attack Hobby and Mark I have kits. In 1/72 scale still the KP kit is one of the few as well as the Bilek kit but still basic (with various copies from Masterkit, Eastern Express etc). (the promised new 1/72 kit of Trumpeter was up till now not released).

In 1/48 scale there was a old classic kit from Aurora and Lindberg but very inaccurate with now a far better kit from Trumpeter. In the big 1/32 scale Trumpeter has a very good well detailed kit.