The Avioane Craiova IAR-93 was developed in a joint Yugoslav Romanian project in the 1970s. The countries needed a close support and ground attack aircraft and wanted to demonstrate their own aircraft design capability in the Eastern Block. The Romanian IAR-93 was called the Vultur, was subsonic and also used as a tactical reconnaissance aircraft with secondary capability as low level interceptor.

First flight of the type was in October 1974 and it had Rolls Royce licensed Viper Mk 632 turbojets. There was a trainer version as well.

The Romanian aircraft were manufactured by I.R.Av. Craiova as IAR-93, and in Yugoslavia by Soko as the Soko J-22 Orao. It was not a very big success with some 88 aircraft built. Some J-22 appear still to be flying today in Serbia and Bosnia 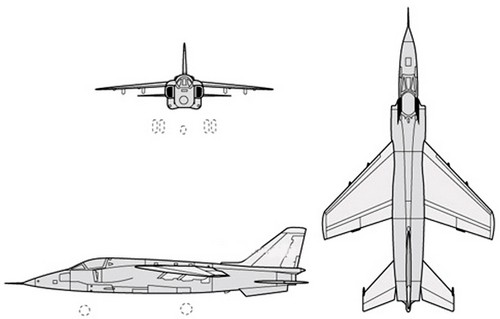 The "159" was seen on a pole outside the National Institute for Aerospace Research (INCAS) (Institutul National pentru Cercetarea Aerospatiala) in west Bucharest, Romania.

This aircraft coded "153" was seen on a very nice display at the National Military Museum in Bucharest, Romania.