The Grumman EA-6B Prowler was a version of the Grumman A-6 Intruder carrier based attack aircraft. The A-6 is a twin-engine, mid-wing aircraft for used from USN carriers. The EA-6B is an electronic warfare aircraft and has been in service with the U.S. Armed Forces from 1971 through the present. It has carried out numerous missions for jamming enemy radar systems, and in gathering radio intelligence on those and other enemy air defense systems. In addition, the EA-6B is capable of carrying and firing anti-radiation missiles (ARM), such as the Shrike missile and the HARM missile. The aircrew of the EA-6B consists of one pilot and three Electronic Countermeasures Officers, it is not uncommon for only 2 ECMO's to be currently used on missions.

From the 1998 retirement of the United States Air Force EF-111 Raven electronic warfare aircraft, the EA-6B was the only dedicated electronic warfare plane available for missions by the U.S. Navy. The type is replaced by the Boeing EA-18G Growler. 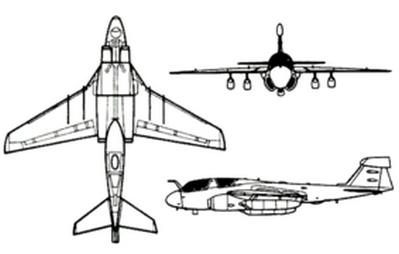 This aircraft was photographed at NAS Pensacola museum.

This aircraft was photographed at USS Midway carrier museum in San Diego.

Used in the Prowler. This seat is on display at Pensacola.

Many plastic scale models exist of the EA-6 Prowler. In 1/72 the kits of Hasegawa/Minicraft kit and in 1/48 of Kinetic, Italeri and Revell. No large scale 1/32 kit is known.

This walk around page was first created January 2012 by M. de Vreeze.