Famous American two seat jet trainer, based on the F-80 Shooting Star. Design work for the Lockheed P-80 began in 1943 with the first flight on 8 January 1944. Following on the Bell P-59, the P-80 became the first jet fighter to enter full squadron service in the United States Army Air Forces. As more advanced jets entered service, the F-80 took on another role - training jet pilots. The American Lockheed T-33 Shooting Star is an American-built jet trainer aircraft. It made its first flight in 1948. Called the "T-Bird" the Lockheed P-80/F-80 fuselage was by lengthened by slightly over three feet and adding a second seat, instrumentation and flight controls. It was initially designated as a variant of the P-80/F-80, the TP-80C/TF-80C.

Originally designated the TF-80C, the T-33 made its first flight on 22 March 1948 with US production taking place from 1948 to 1959. Many planes were used by NATO countries and American allies. The type was also used by the Dutch Air Force as jet trainer. 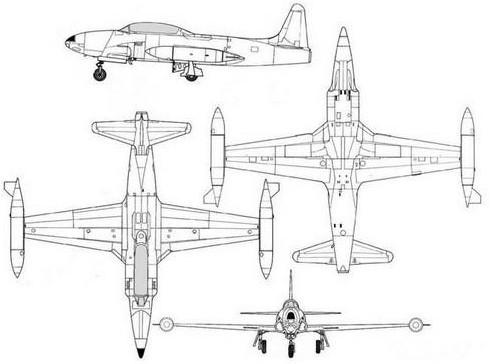 GALLERY WITH OVER 60 PHOTOGRAPHS:

Aircraft serial 51-4415 , nick name "ace maker". This aircraft photographed is a former French Air force aircraft painted in the scheme of USAF 57 FIS at Kevlavik, Iceland. It is now on display at the Midland Air Museum, Coventry, U.K.

Many scale models in plastic have appeared over the years. In 1/72 old kits were from Hasegawa and Heller but now Platz has a far better kit.In 1/48 Hawk and Hobbbycraft and Academy had kits with now a good Great Wall Hobby kit. In 1/32 CZECH/Squadron is the only plastic model.