The Ling-Temco-Vought A-7 Corsair II is a carrier-based subsonic light attack aircraft introduced to replace the United States Navy's Douglas A-4 Skyhawk during the nineteen sixties, initially entering service during the Vietnam War. The Corsair II was later adopted by the United States Air Force, to include the Air National Guard. The aircraft was also exported to Greece in the 1970s, and Portugal and Thailand in the late 1980s. The A-7 airframe design was based on the successful supersonic Vought F-8 Crusader. It was one of the first combat aircraft to feature a head-up display (HUD), an inertial navigation system (INS), and a turbofan engine. 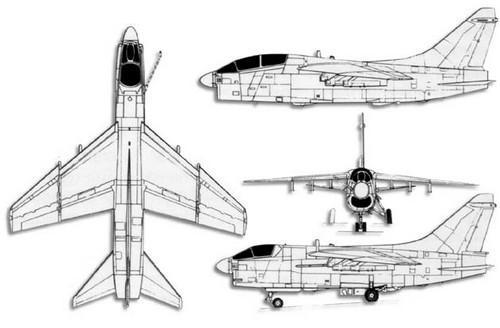 Serial BuNo 160713, VA-46 Clansmen. Operated also form USS John F. Kennedy in the Red Sea on the first night of Operation Desert Storm. It has a low visibility scheme and this plane is at the Pima Air Museum, Tucson, Arizona (USA).

GALLERY WITH OVER 50 PHOTOGRAPHS:

Details of the A-7 cockpit.

Details of what seems a A-7D cockpit. It is on display at the USS Midway aircraft museum in San Diego, CA.

Various plastic scale models have been released. In 1/72 the best kits are from FUJIMI. In 1/32 Trumpeter released a kit of both USAF and US Navy version.

This webpage was first created January 2012 by M. de Vreeze