The MiG-23 was developed by the Soviet design buro of Mikoyan. First demonstrated to the public during the Soviet Domodedovo airshow in 1967, the MiG-23 was a major advance in fighter design over the preceeding MiG-21. The aircraft uses variable-sweep wings that can be set at 16, 45, or 72 degrees of sweep to improve performance at both subsonic and supersonic speeds. The MiG-23 is said to be easy to fly, popular with pilots, and very reliable. A simplified model was widely exported, especially to Middle East/ Arab nations, though success has been limited.

Though still in service with a number of nations, the MiG-23 and related simpler variant MiG-27 were phased out of Russian service in 1994. Many were used by Warsaw pact nations like Poland, east Germany, Hungary, Romania and many more. It was also exported to Soviet "friends" during the Cold War. An attack version was the MiG-27 with simplified systems but a canon.

The NATO used the code name "Flogger" for this aircraft. 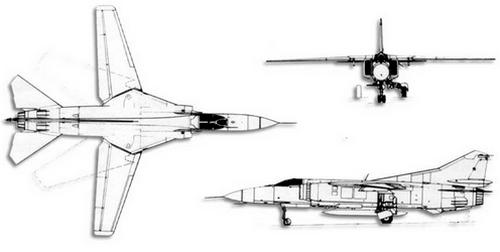 This aircraft is a former Iraqi AF plane, it looks to be a MiG-23 MF. Photographed at the "US intelligence" museum at Nellis AFB, Nevada, USA

This camouflaged aircraft is at the Pima museum (Az., USA).

This MiG-23ML Flogger-G has a Soviet air force camouflage scheme. It is on display at the Musee de l'Air et de l'Espace at Le Bourget airport, Paris.

This MiG-23 BN is a fighter-bomber version without radar in the nose. NATO name is "Flogger-H". This is probably a former Egyptian air force aircraft (serial 4421) that also under went testing in the USA. It was repainted in Soviet air force camouflage scheme as RED 23 and acquired by the Legermuseum at the Jubelpark in Brussels (B) where it is on display. This aircraft does not have the engine installed but the various rocket pods and bombs are shown on the pylons.

Many plastic scale models exist of the MiG-23. To list a few: in 1/72 scale the old Hasegawa, Academy/ Minicraft, Airfix, Bilek / Italeri kits which have now been superceeded by the better RV models and ART Model kits. In 1/32 scale Trumpeter has a very nice kit as well as in 1/48. Older 1/48 kits were from ESCI (inaccurate) and Hobbycraft.

This webpage was first created January 2012