The Fokker 100 is a medium size twin-turbofan airliner from the famous Dutch Fokker Aircraft Company. The project started in 1983, the Fokker 100 was a completely re-designed Fokker F-28. It got some advanced wing aerodynamics, new generation Rolls-Royce Tay turbofan engines and new avionics suite. To allow more passenger capacity, the longer fuselage increased seating to a maximum of 107. Usually in a three-by-two single-class arrangement.

The prototype flew November 1986 with final certification November 1987. In the beginning, large order were placed which was quite new for the smaller scale Fokker company. American Airlines ordered 75 aircraft and others like TAM Transportes Aéreos Regionais 50 aircraft. Also KLM ordered the Fokker 100 for their CityHopper subsidiary.

( A shorter version was also developed for airlines that were used to operate the F-28 and smaller jets. This was the Fokker 70).

The type was very reliable and had low operational costs. It flew very well and was liked by its pilots.

For the future, Fokker wanted to develop new aircraft. Funding is always a problem in the Aviation industry but the Dutch government followed the rule that government funding was to be stopped whereas competing manufacturers still as of today got funding assistance. Fokker Aircraft management was forced to look for funding and cooperation elsewhere and the result was merger with a DASA. This was a struggle and the Fokker company unfortunatley went bankrupt in 1996. 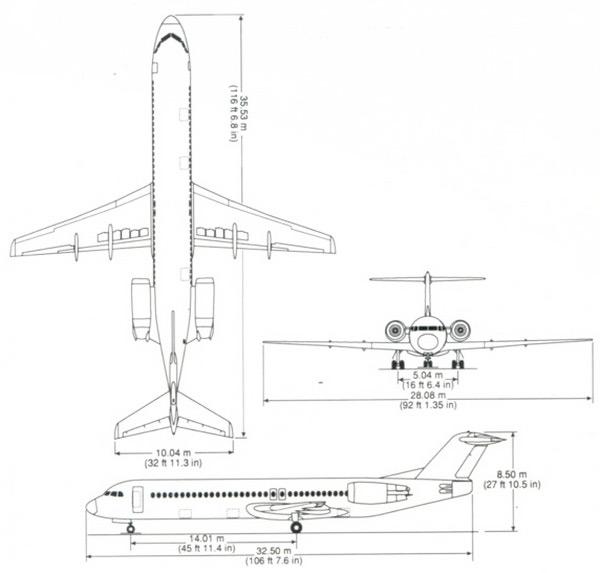 NOTE: A first series of photos with engine intake rings with de-icing are not fitted to the aircraft engines, but are put on the ground.

Second series of the same aircraft with intake rings installed...

Only a few scale models exist of the Fokker 100. In 1/144 models are available from Revell and a vacuform from Welsh.

This walk around page was first created November 2012 by M. de Vreeze