The Eurofighter was produced in a European cooperation program with the United Kingdom, Germany, Italy and other European countries. British Aerospace of the United Kingdom began with the EAP program in the 1980s and experiences were used in the design that was called the EFA "European Fighter Aircraft". The Eurofighter aircraft is built with advanced composite materials to deliver a low radar profile and strong airframe. It had a lot of delays and problems during development with a first prototype ready in 1994. The Typhoon has a maximum speed is about MACH 2.0 and it has EJ200 jet engines. Various sensors can be fitted like the Infrared tarcker IRST and a large array of different armaments. It has an internal 27mm Mauser canon and missiles are e.g AMRAAM, ASRAAM en Meteor. Smart bombs can also be dropped when required.

Now given the name Typhoon EF-2000, the production started in 1998 but still with many delays. Over 500 aircraft have been produced and still production is going on. The Eurofighter Typhoon is flown in United Kingdom with the RAF, Germany with the Lufwaffe, Italy and Spain. Exports are to Austria, Saudi Arabia, Kuwait and Oman. There are only some external differences between the versions.

A two seater trainer is also available with a large canopy but otherwise almost unchanged airframe. 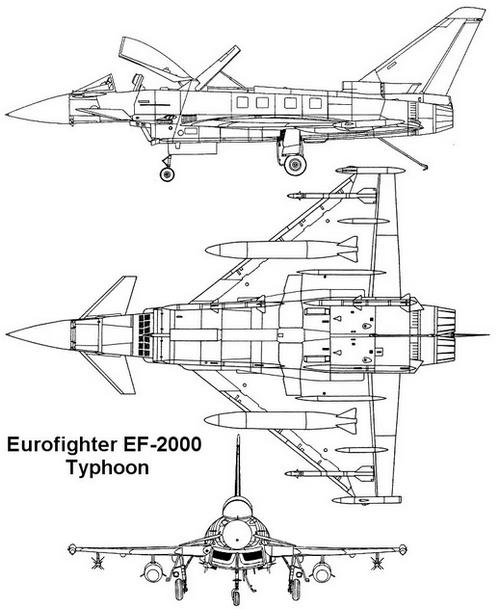 This Eurofighter is of the Royal Air Force and is seen on a PR display with a large weaponry.

The Eurofighter is the primary air defense fighter of the modern Luftwaffe. Several aircraft are shown here seen on various European airshows like Leeuwarden (NL) and Sanicole (B).

The Eurofighter is a populair subject for plastic scale models. Older kits represented the basic prototype such as the EFA of Revell in 1/32 scale and old EFA. Newer kits are better for production aircraft models of both single and twin seaters. In 1/144 models are of Revell, Pit Raod, and Academey. In 1/72 the older Airfix EFA kit and newer Typhoon as kit , by ERTL/ ESCI , Italeri, Hobbyboss but the better kits are from Revell and Hasegawa. In 1/48 by Revell and Italeri.  In 1/32 Revell has a good kit while the Trumpeter kit is a little less accurate.

One of our IPMS NL members has made the Typhoon in 1/32 by Revell in an RAF scheme with some improvements. Visit this webpage... [external link]