The Grumman F-14 Tomcat was designed through the VFX program by the American Grumman company in the 1960s, with first flight December 1970. It was a supersonic, twin-engine, variable sweep wing, two-place fighter designed for the US Navy to attack and destroy enemy aircraft at night and in all weather conditions. Capable of carrier operations, the F-14 could track up to 24 targets simultaneously with its advanced weapons control system and attack six with Phoenix AIM-54A missiles while continuing to scan the airspace. Armament also includes a mix of other air intercept missiles, rockets and bombs. Being a 2-seater which is not standard for a fighter,  the navigator and weapons specialist concentrates on weapons deployment while the pilot focusses on flying. The wings are designed for automatic variable sweep during flight, with a manual override provided. The max speed is about MACH 1.88. It was the best fighter available to the US NAVY although is was very expensive. Some aircraft were sold to Persia during the Sjah regime, later operated by the Islamic air force of Iran. 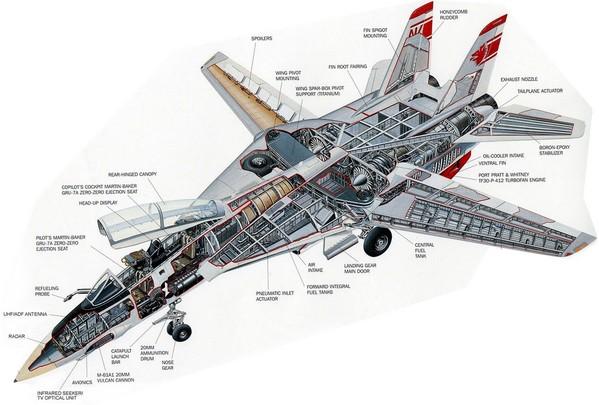 This particular aircraft was photographed at USS Midway museum in San Diego, California

F-14A
This F-14A serial.no 162689 coded has a scheme of the VF101 Grim  Reapers. It has also pods and dummy missiles fitted. It is on display at the USS Hornet museum in San Francisco, Ca., USA.

F-14A cockpit
This is a F-14A cockpit. The canopy hood is closed, preserving the cockpit but making photos a bit difficult. Seen at the "Yanks museum" at Chino, Ca.

Many scale models exist of the Grumman F-14 Tomcat, too much to list here! In 1/72 scale the Fujimi and Hasegawa kits are fine. In 1/32 scale there was the expensive Tamiya, the much cheaper Revell kit and later Trumpeter released a kit.