The Messerschmitt Me-262 was the world's first operational jet-powered fighter aircraft. It was designed by the German Messerschmitt aircraft works, work starting before the Second World War in 1939. Jet aircraft were unknown at the time and so a lot of design problems were encountered. The Me 262 did not appear until later in the war and was designed as a fighter. But it was decided that is was also to be used as a light bomber. It was called the "Schwalbe" by its crews.

When the war ended, a Me-262 was tested by RAe Farnborough. The famous English test pilot Captain Eric Brown stated that this aircraft was the most formidable fighter aircraft of the Second World War he ever flew with spectacular performance in not only speed but also manoeuvrability. 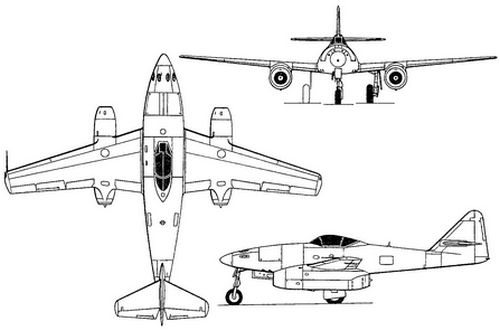 Several two-seat trainer variants of the Me 262 but in low quantitites. Most pilots had to make their first flight in a jet in a single-seater without an instructor. The Me 262 B-1 twoseater was fitted to be a night fighter, complete with on-board FuG 218 Neptun high-VHF band radar, using Hirschgeweih ("stag's antlers") antennae with a set of shorter dipole elements than the Lichtenstein SN-2. A few were deployed near Berlin.

This replica aircraft is located at the National Museum of Naval Aviation, Pensacola, Florida

This aircraft has werkenr W/NR.112372 and was deliverd to the Luftwaffe March 1945 to JagdGeschwader JG7. In May 1945 surrender was at Fassberg and confiscated by the RAF and probably even temporarily flown to the Dutch field of Twenthe with english roundels. It later went to the UK for test at RAe Farnborough. It is on display at the Imperial War Museum in Duxford (UK).

Many many scale models of the various versions have been released over the year in plastic of the Me-262. Examples are in 1/144 from Fujimi, Revell, Trumpeter and Eduard. Faller and Tamiya in 1/100 scale. In 1/72 scale dozens of kits like Airfix, FROG, Heller, Revell, matchbox, Hasegawa, Hobbyboss, Amodel,  MPM,  Smer and others.