The Mikoyan MiG-29 with NATO reporting name "Fulcrum" is a fourth-generation jet fighter aircraft designed in the Soviet Union. Detailed design started in the early nineteen seventies, with the designated MiG-29A first flight taking place on October 1977. The pre-production aircraft was first spotted by United States reconnaissance satellites in November of that year; it was dubbed Ram-L because it was observed at the Zhukovsky flight test center. It was designed with two large intakes that are closed during initial take-off to protect the engines against debris. The MiG-29 is used as fighter but also "escort".

The MiG-29UB is a trainer two seat version. The type was widely exported in downgraded versions to also non-Warsaw Pact countries. The MiG-29 was also used by the German DDR. Some variations in type MiG-29 were also developed.

Upon the fall of the Iron Curtain, some aircraft were "put into service" by the West German NATO Luftwaffe! Also Poland used the type when it became a NATO partner, but now it is replaced by the F-16. India is also a large user.

A navalised version, the MiG-29K was also developed for the Russian Naval aviation. 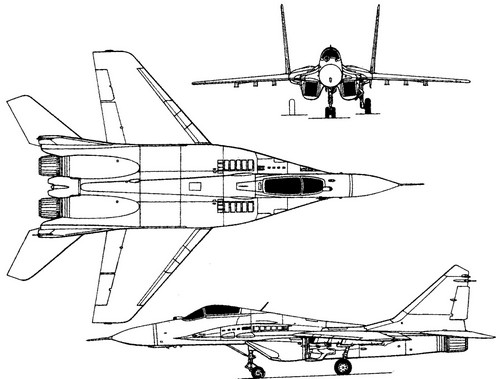 Here a Mig-29 "C" is seen at Nellis AFB USA and also some details of the display inside the USAF "Intelligence Museum" at Nellis.

From a German Air Force manual, written after the "merger of Germany". Collection M. de Vreeze (used with permission)

In 1/32 kits of different versions are available from Revell (both single as two seater UB !), reasonable kits at the time. Later Trumpeter came with a MiG-29K naval version. May 2017 Trumpeter released a brand new MiG-29A 9.12 in 1/32 scale that looks quite good.

This walk around page was originally created Aug 2013 by M. de Vreeze